TRACKING THE QUALITY AND LONGEVITY OF DOUBLE CHIP SEAL PROJECTS

Double chip seal is the most cost effective way to treat asphalt pavements that have deteriorated too far to be saved by a single chip seal. It will hold up better than micro-surfacing or a thin overlay because it bonds to the old pavement better, it seals better, and is more flexible. To substantiate this, we continue to monitor the condition of past projects. 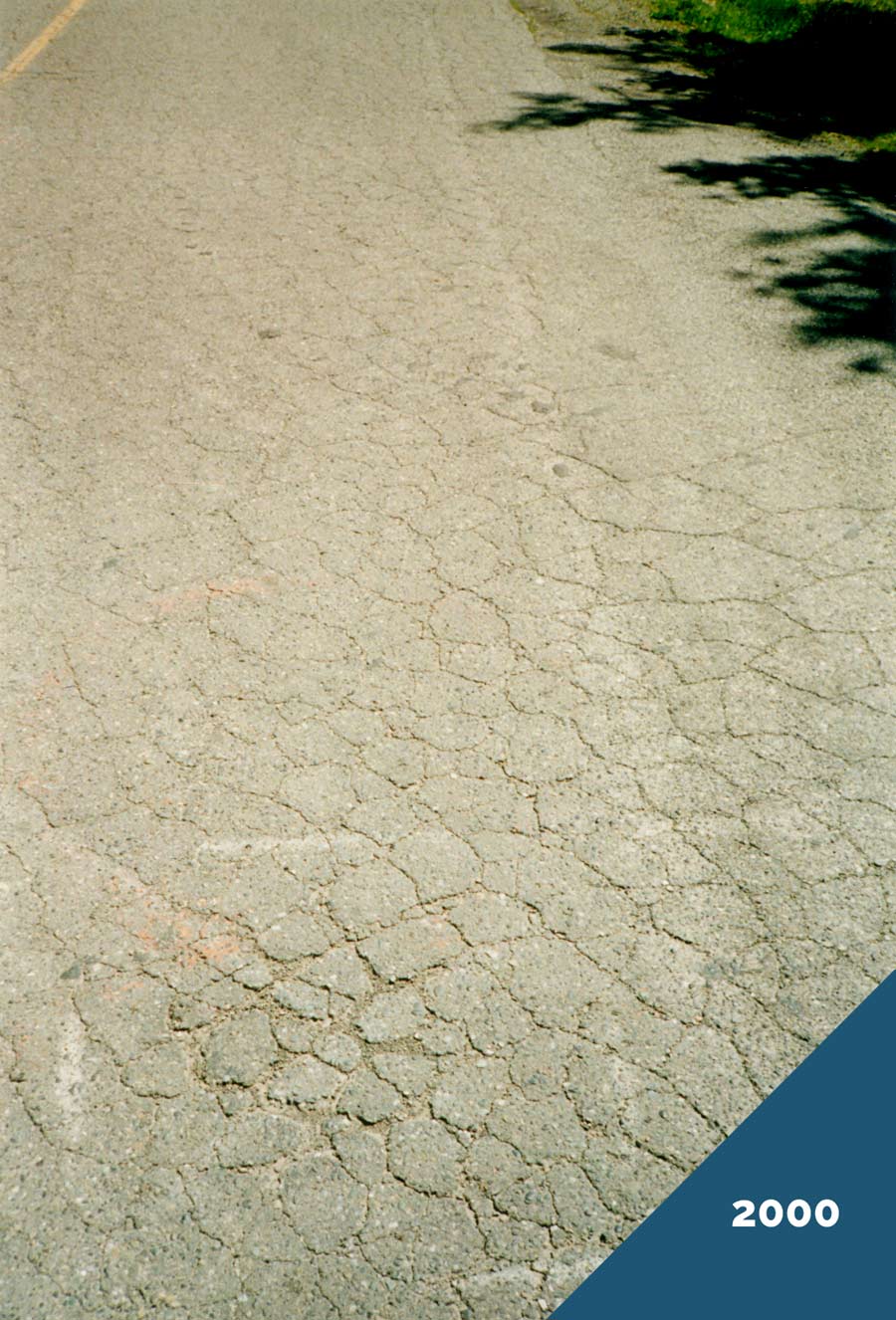 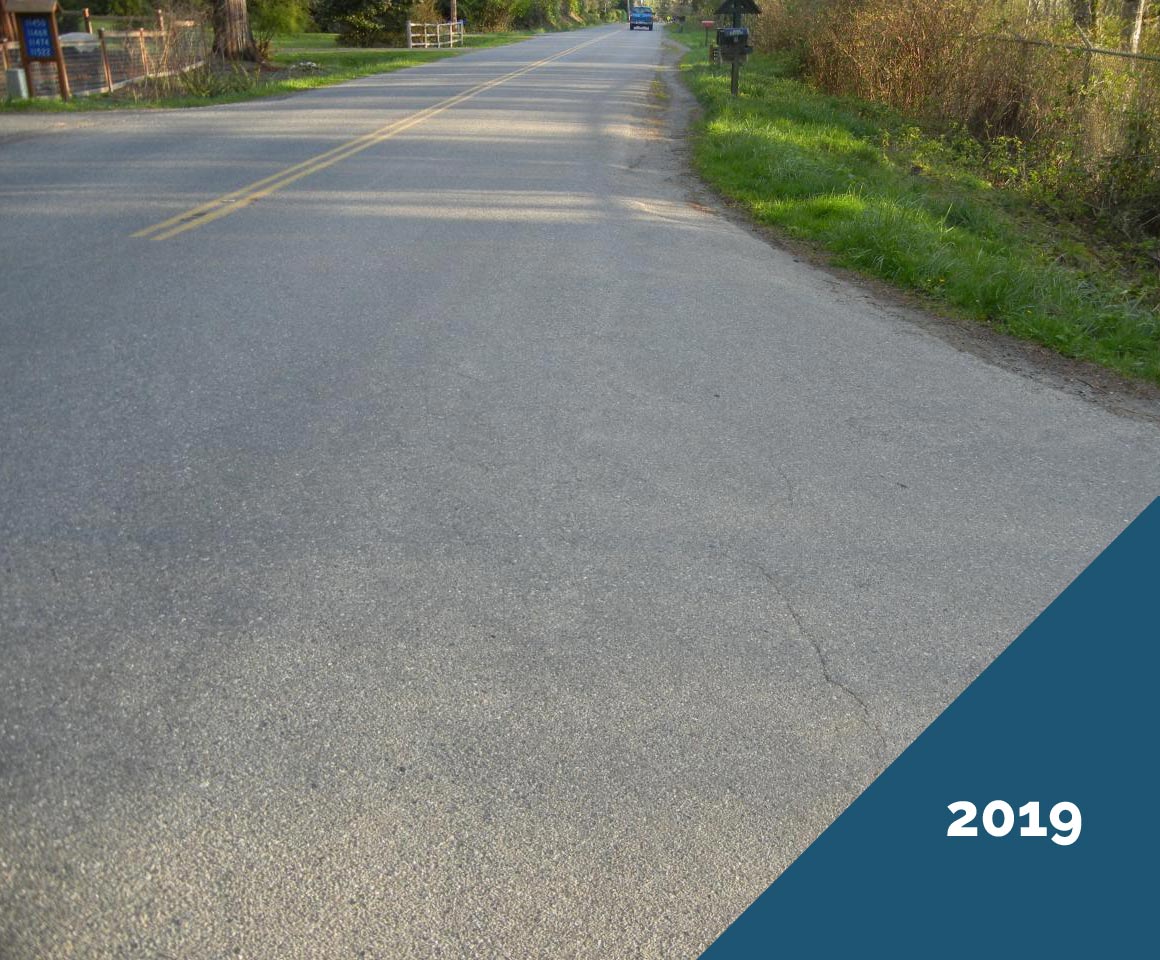 October, 2019 - 19 years after double chip seal. A few cracks have started, but it is in much better condition than it was.

In 2000, a double chip seal was applied to this road. 1/2"-1/4" crushed screenings were used on the first lift and 3/8”-#10 on the second lift. Prior to applying the two lifts, the road showed signs of extreme alligator cracking in this area.  The road needs to be scheduled for another chip seal; it is in fair condition with some cracks starting.  The City of Bainbridge Island has done over 55 miles of double chip seal in the last 21 years; and many more miles of single chip seal, using chip seal patches beforehand where needed.  The double chip seal has worked very well, staying flexible, and bridging over cracks and alligatored areas.

2021 UPDATE ON THIS SECTION OF ROAD: The double chip seal reached the end of its useful life 21 years after application. The lack of maintenance became obvious in the 2 years after 2019, as the road condition in 2019 was fair (a few cracks had started), then developed widespread alligator cracking that was noted in 2021. To keep the road in good condition, it should have received a maintenance chip seal sometime before 2016.

In front of a busy Safeway store and gas station we placed a double chip seal in 2005. The pavement had “block” cracking throughout the entire area. Liquid asphalt CRS-2P was applied, with 1/2"-1/4" aggregate on the bottom lift, 3/8”-#10 for the top lift, then a CSS-1h (diluted) fog seal was applied.

As of January 2021, almost 16 Years Later (2nd photo), the pavement has developed a few cracks, but is still much improved. Recommend another chip seal at this time, but the previous “block” cracking is not reflecting through. 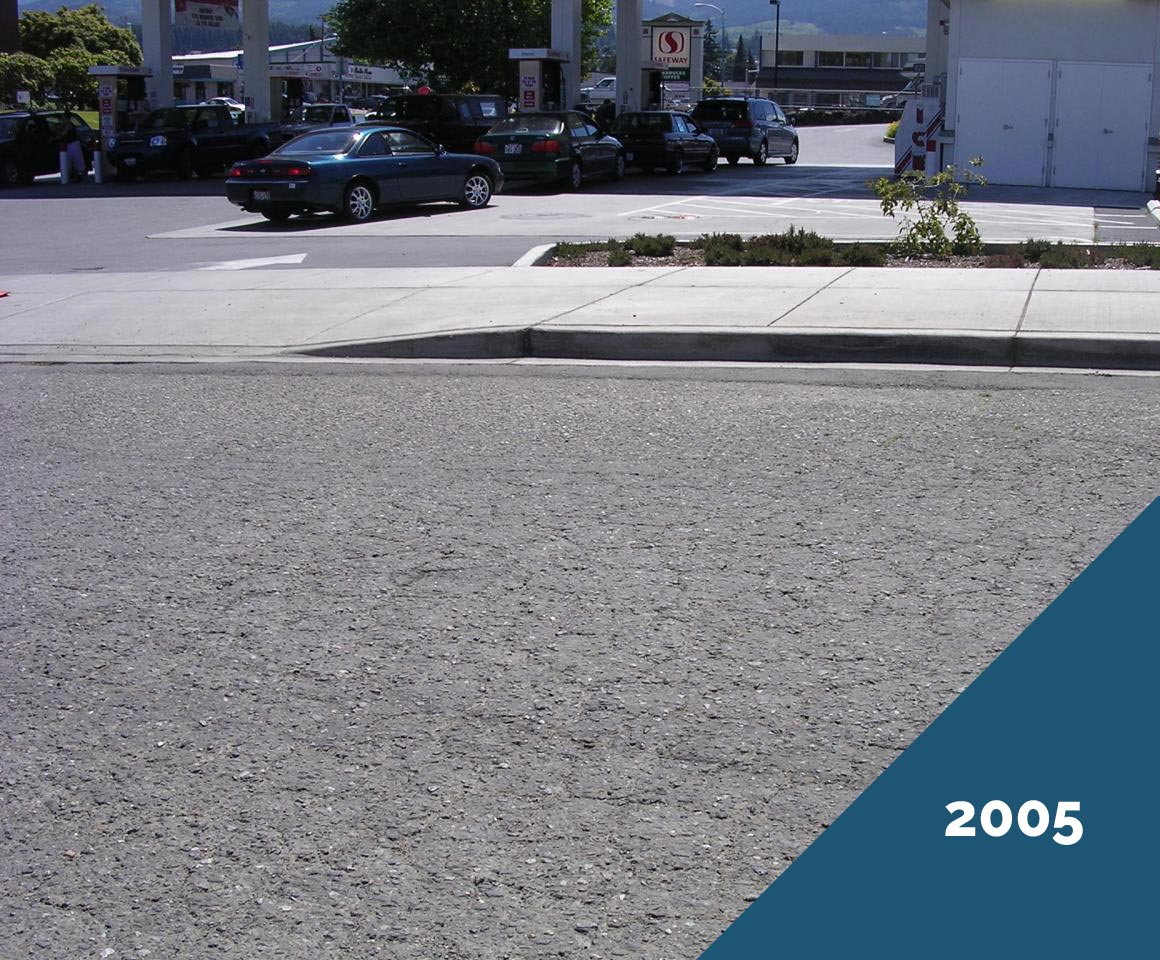 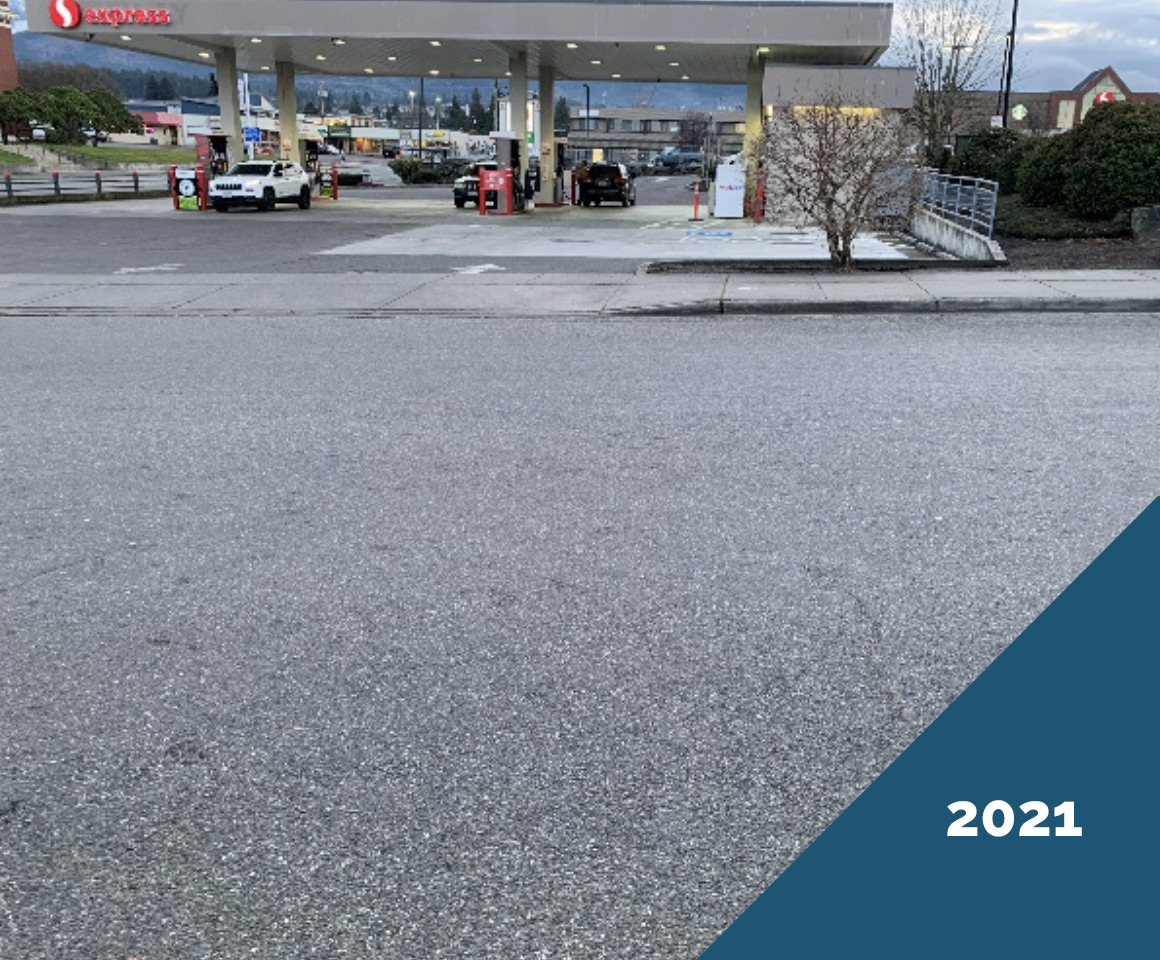 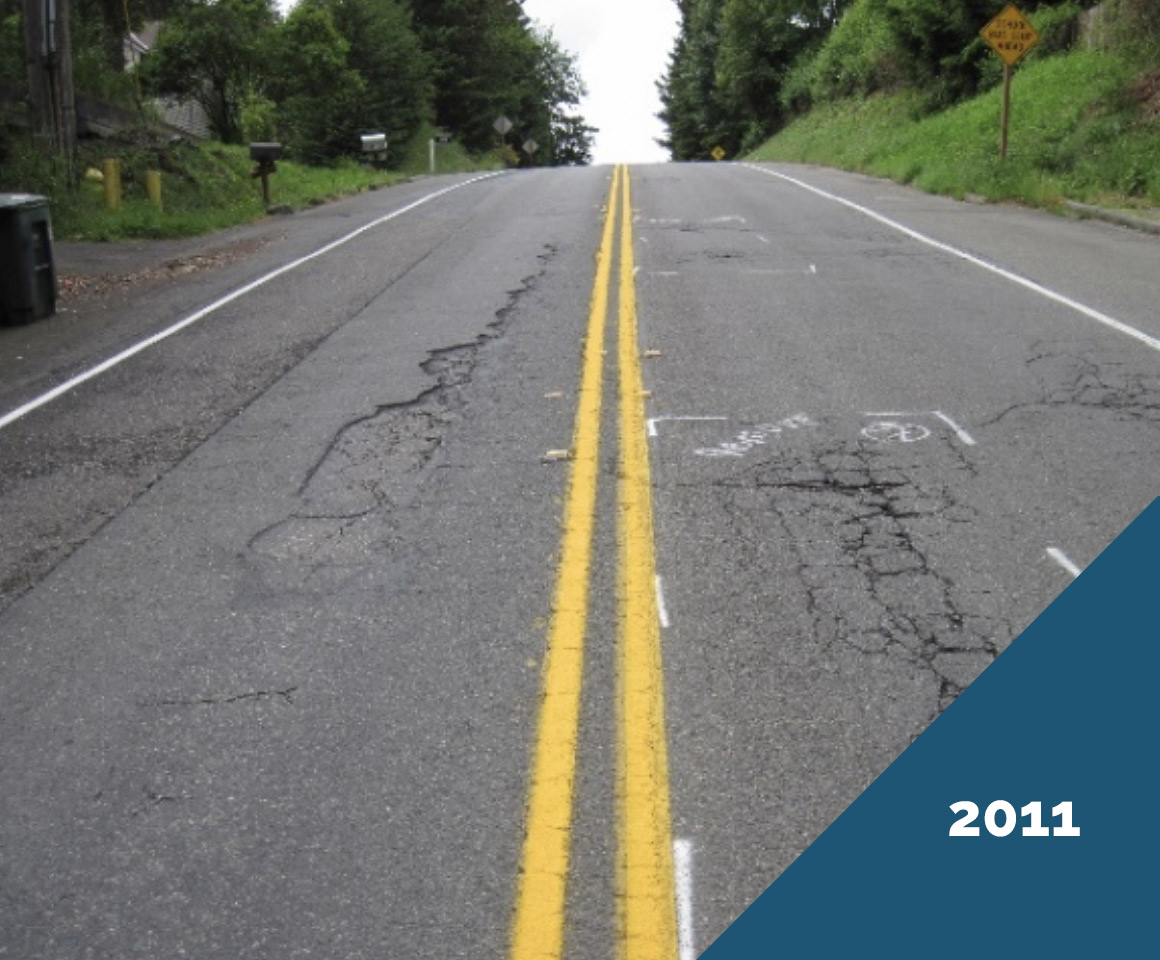 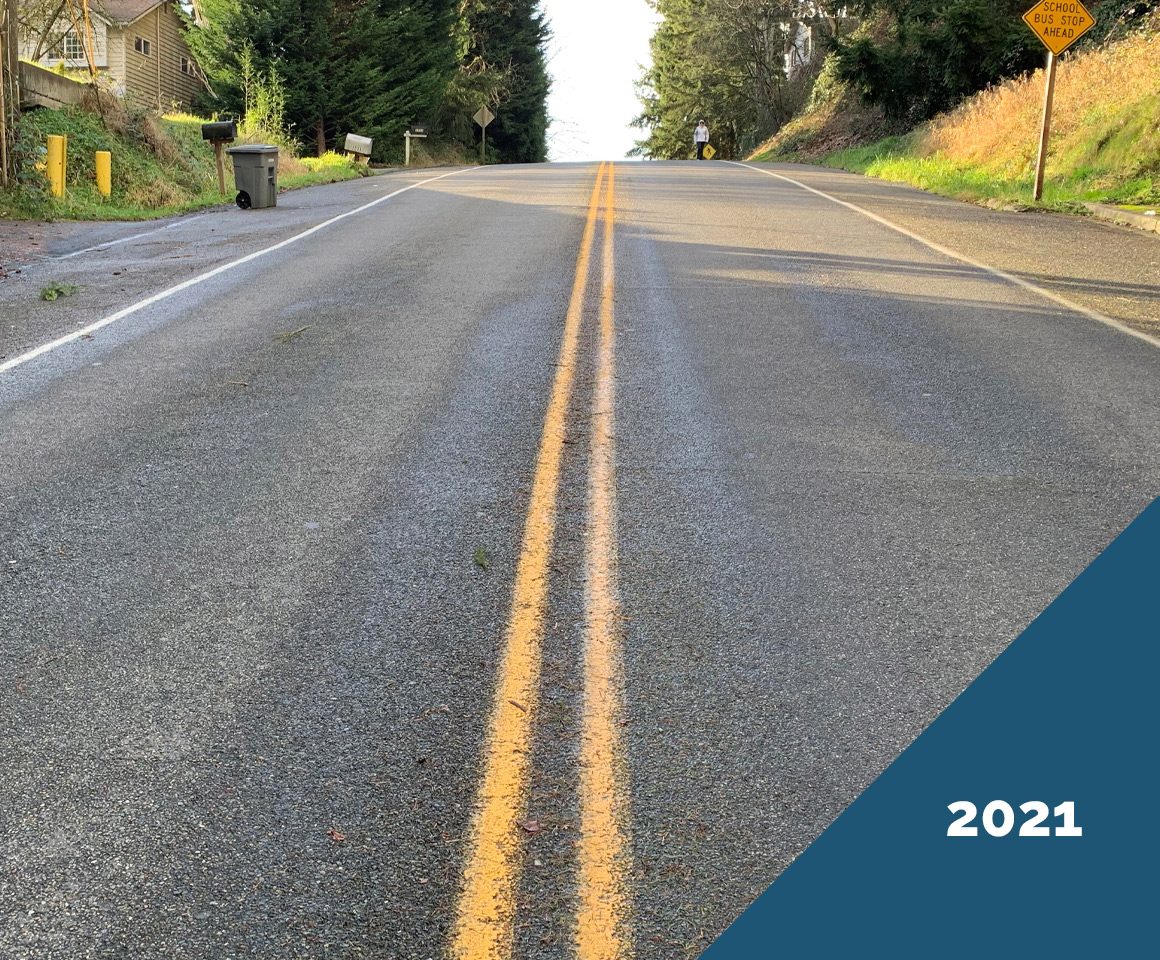 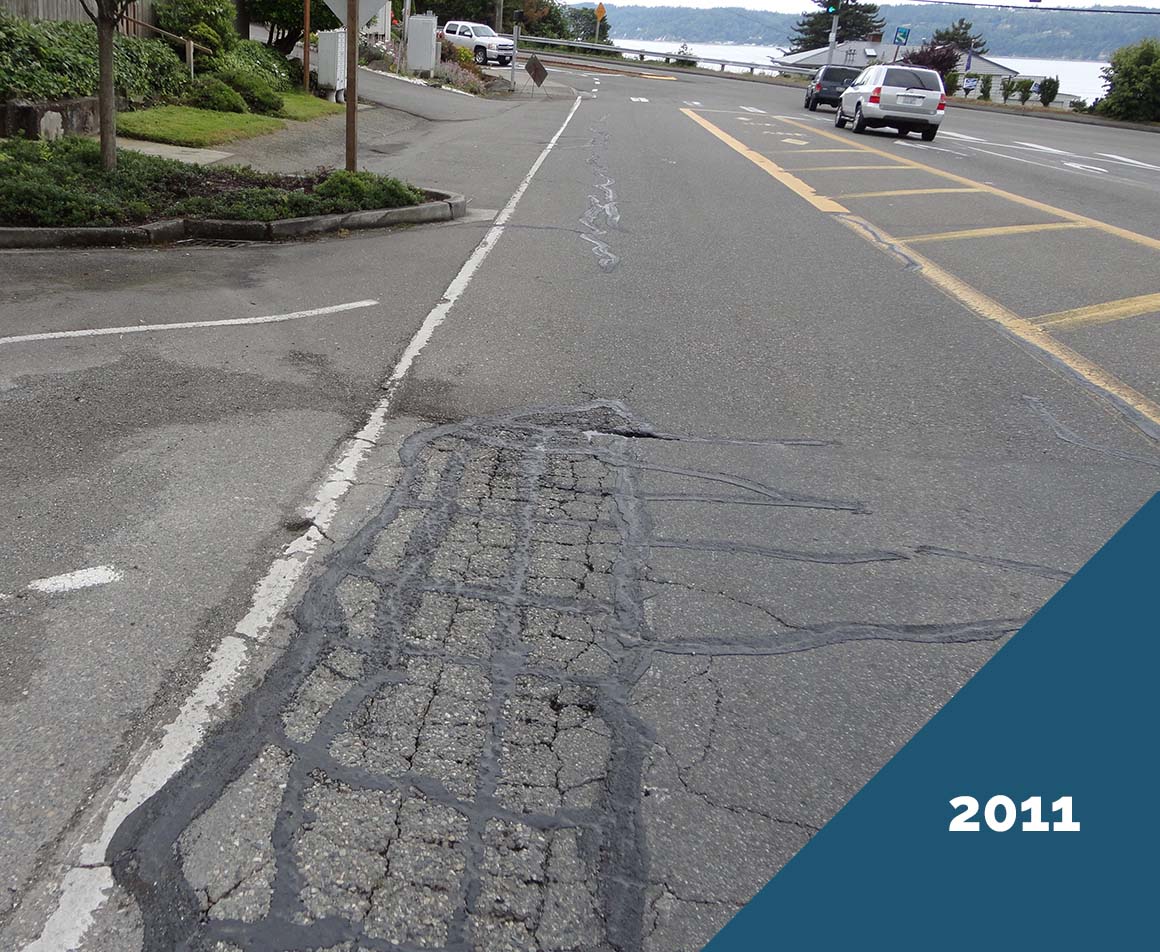 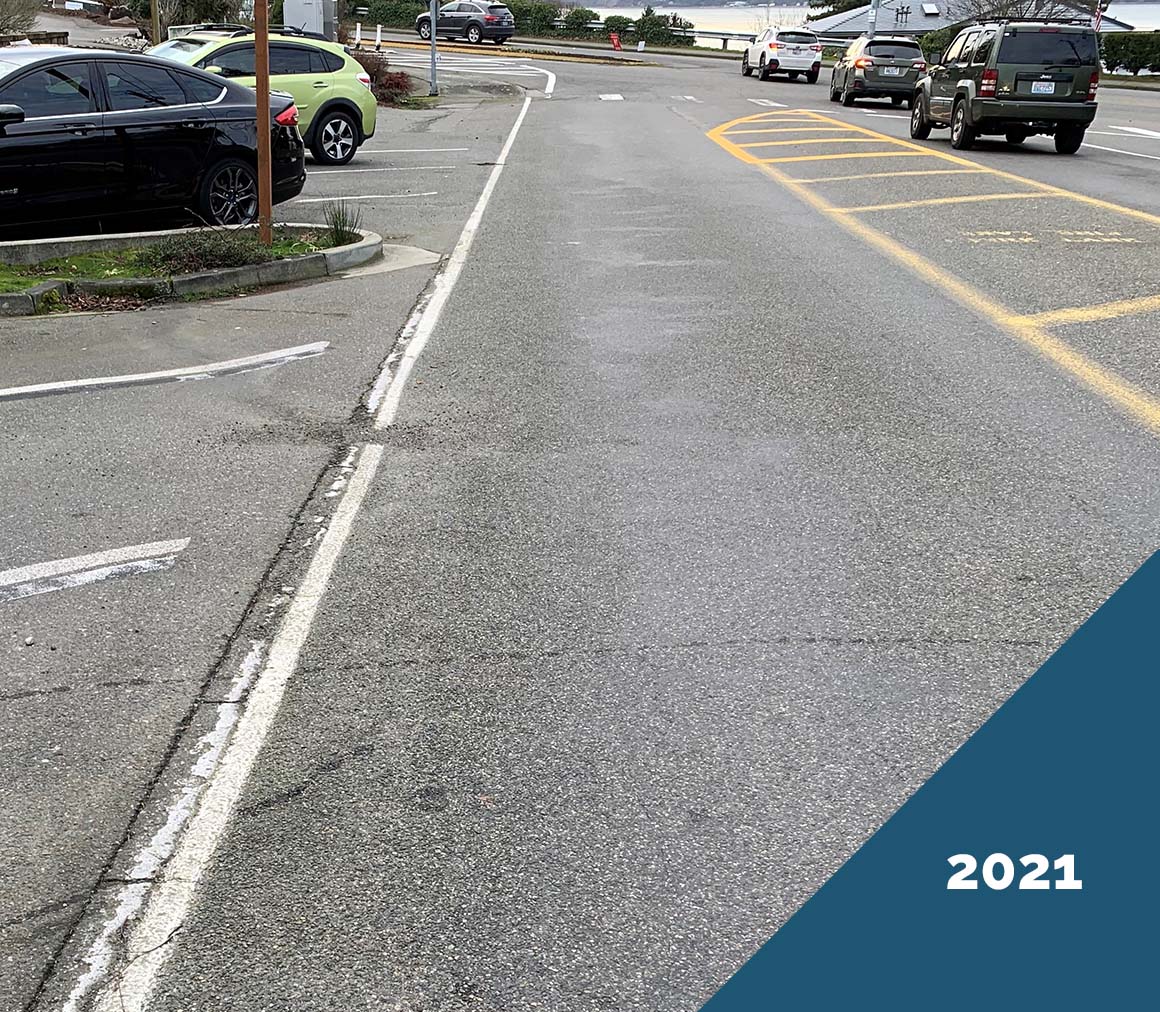 January 2021, over 9 years later. No sign of any cracks or deterioration. 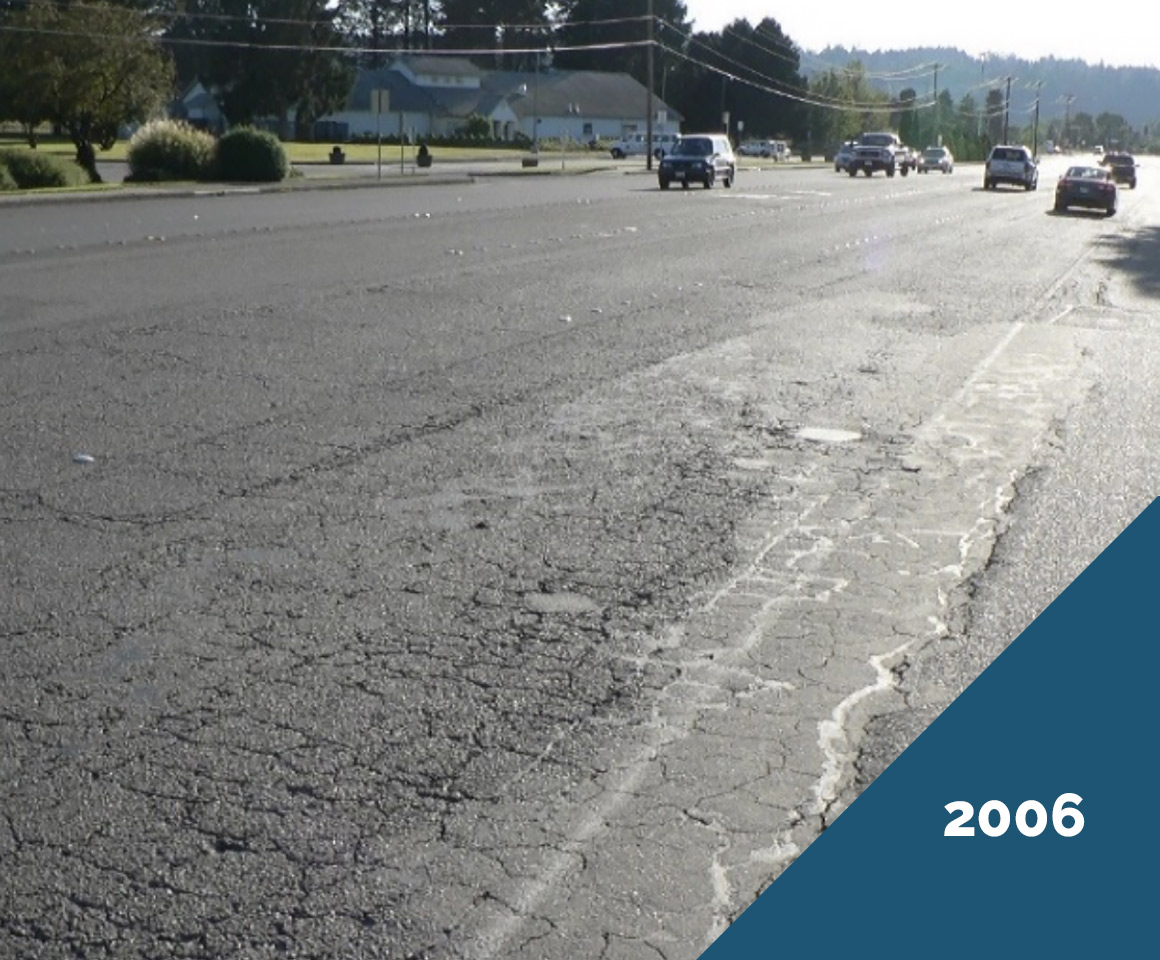 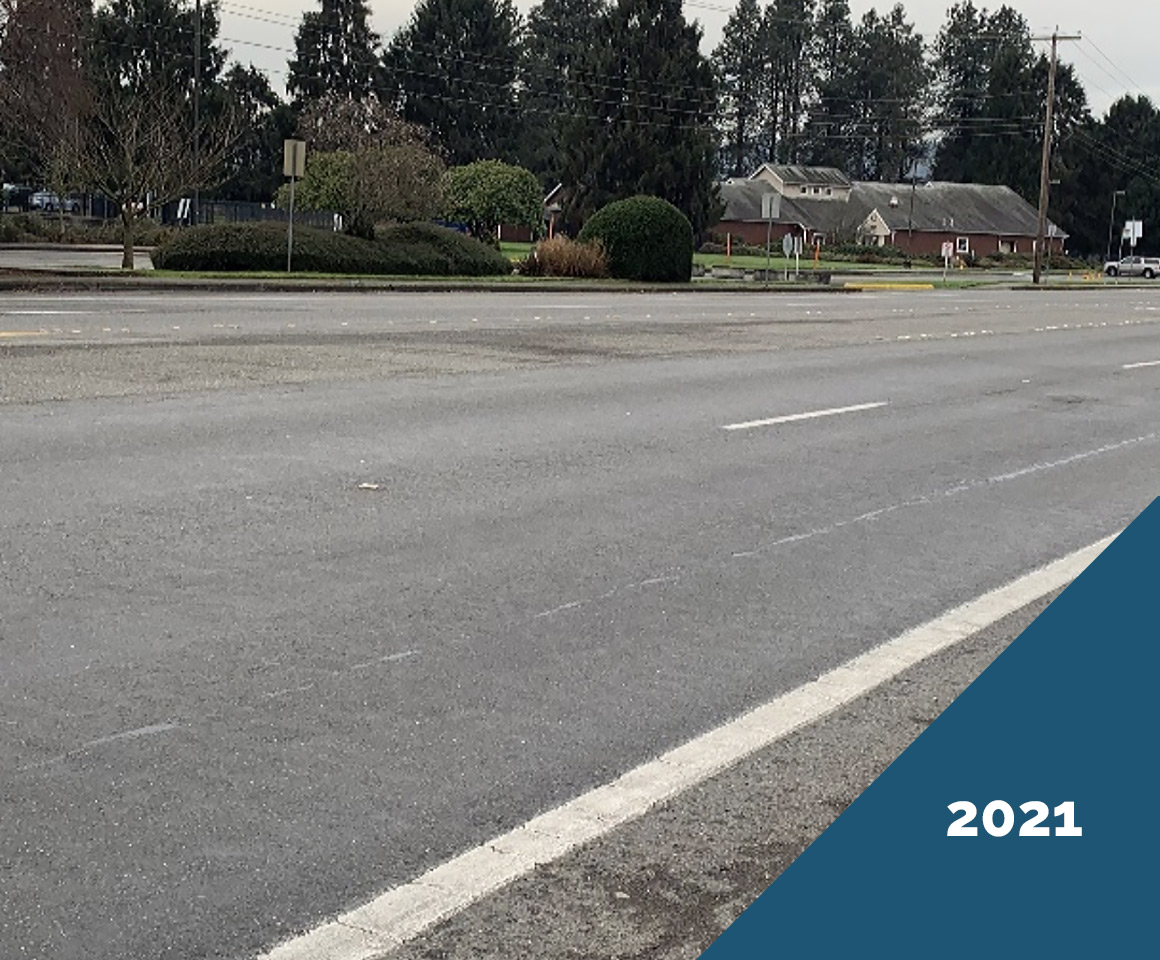 January 2021 – Over 14 years after the double chip seal, (westbound driving lanes only). Considering the heavy traffic, the age, and the terrible condition it was in, the 2006 seal has done its job.  It is now in “fair” condition, definitely time for another round of maintenance.

This busy Auburn arterial should have had the pavement ground off and replaced with hot mix asphalt. The funds were not available for that, so we applied a double chip seal in 2006. The first lift of chip seal was installed using 1/2"-1/4" aggregate.  The second lift used 3/8”-#10 aggregate, then fog sealed with CSS-1H. It has had no maintenance since then, it is a little bumpy with a few cracks, but the double chip seal is holding it together in much better condition than it was. 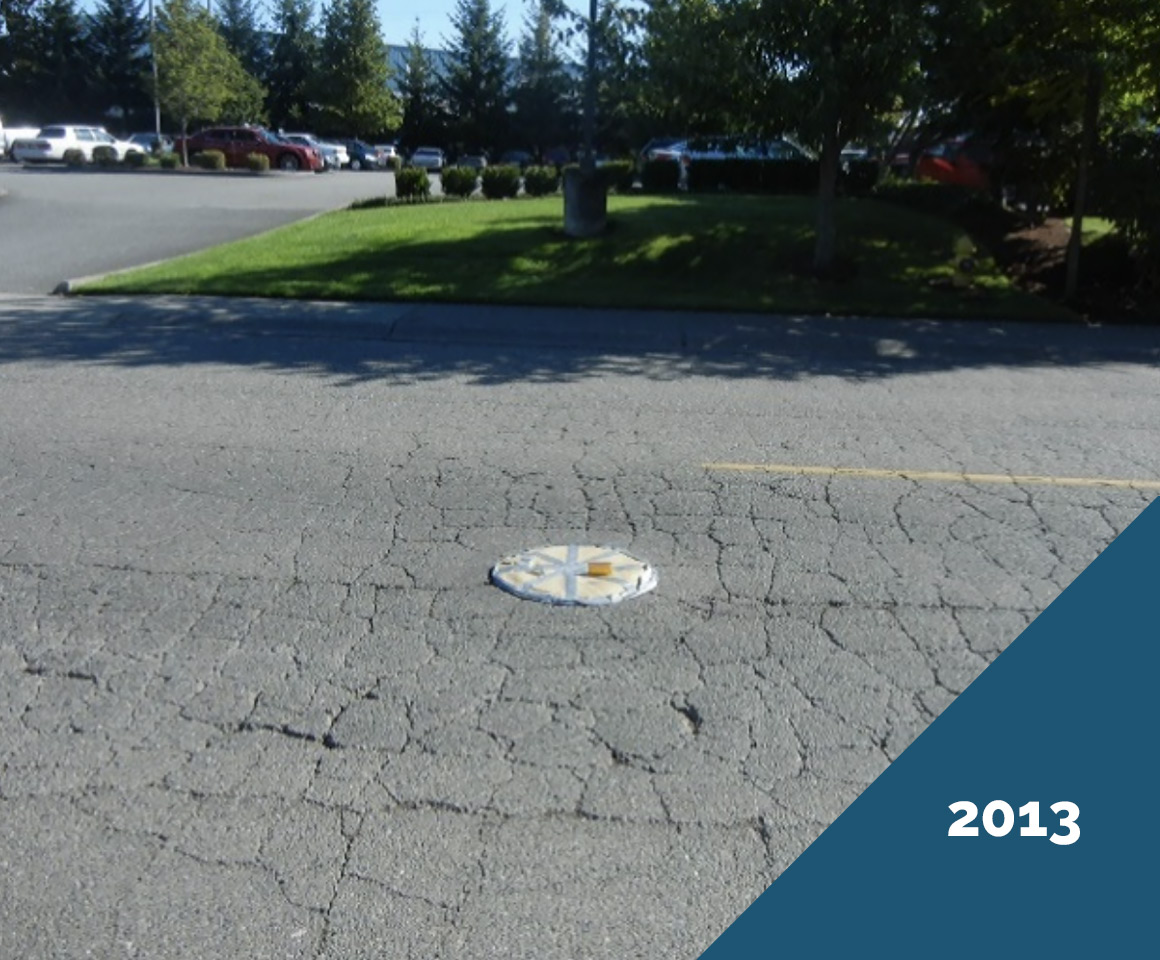 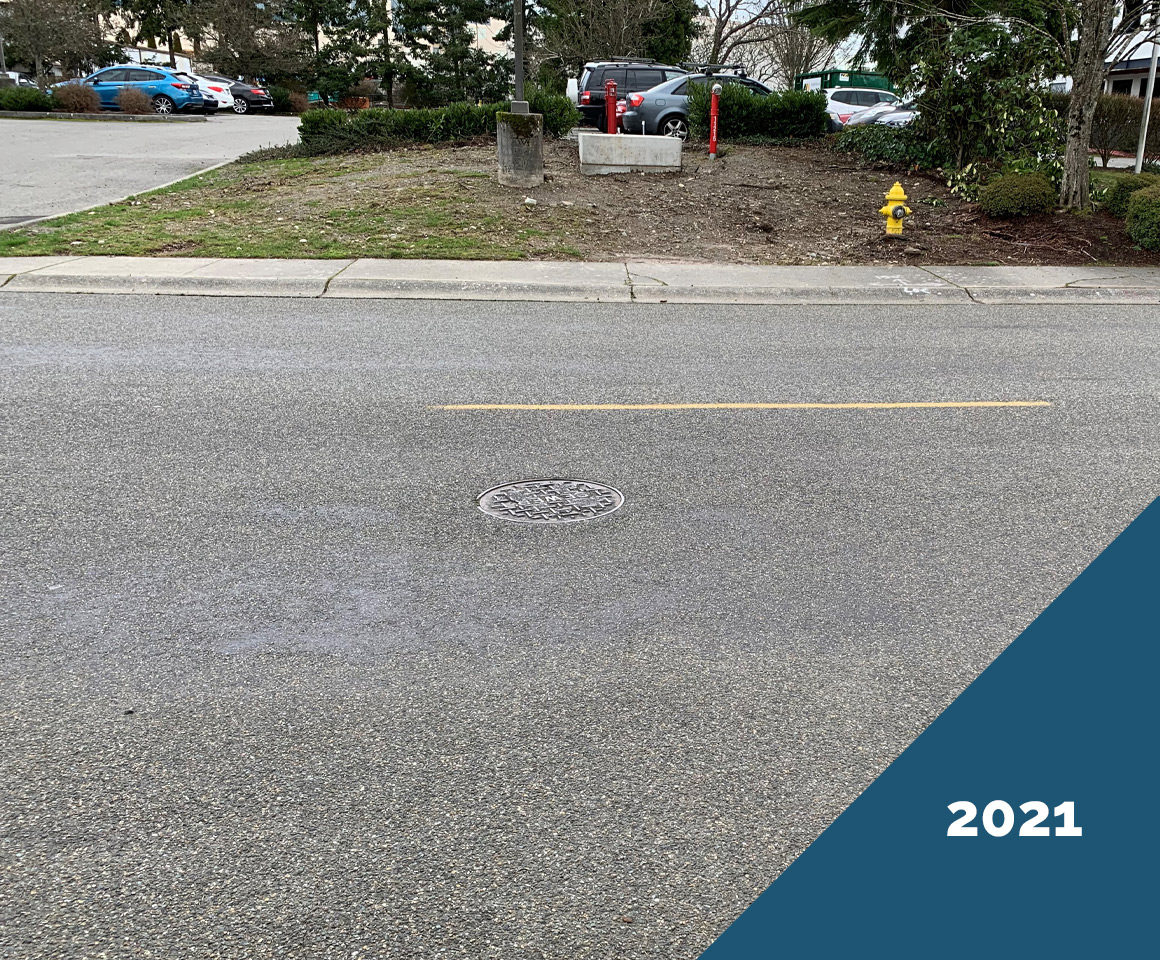